R-Pi and the mainframe

As far as I can work out I'm probably the second person to do this, and the first in Finland. Andrew Back's blog has an Raspberry Pi running Hercules, and in a later post SimH and VMS.

The Hercules mainframe emulator compiles successfully under Debian on the Raspberry Pi. With a few minor tweakings to get gcc to accept the armv6l parameter to the --mcpu and --march options. Surgery to the config.status file removing every reference to armv6l worked (not a pretty solution!).

Compilation took around 90 minutes with about 10-15 for the make install at the end. Typing "hercules" at the command prompt gives: 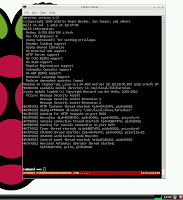 NB: Ignore the date, I was too lazy to set the R-Pi's clock..

So hercules compiles and runs. Now just waiting for the download of Volker Brandke's Turnkey MVS 3.8j distribution via Jan Maynard's IBM public domain software collection and in an hour or so should have MVS running on an emulated IBM mainframe on an 32 euro (in P&P) single board computer. Anyone fancy doing the performance calculations between the R-Pi and the original mainframe?