Syrup Sponge - in a microwave

Bit lax on posting here.... :-) But at least one entry per year.... Syrup Sponge (aka Steamed Pudding) Two options for cooking, 4 hours steaming in a water bath or 5 minutes in the Microwave (seriously!!) Original from here https://www.bbc.com/food/recipes/syrupspongewithprope_4983 Ingredients 125g butter melted 100g sugar 2 eggs 150g plain flour 1 tea spoon baking powder (leivinjauhe) 1-2 tablespoons of milk NB: you need syrup too, but DON'T add it to the mix yet (see later) Optional Ingredients #1 Lemon :Squeeze half a lemon + grated peel of 1 lemin #2 Vanilla :A few drops of vanilla essence #3 Do #1 and #2 #4 Add whatever you like - Lemon and Vanilla are good - experiment with how much #5 Use lime as well as/instead of lemon - this might work - orange too probably #6 Rum ... instead of the milk .... hell, why not?! Let me know.... rum essence will work too. Method Mix all of the above (not the syrup) together - should be "gloopy" not stiff or too liquid Now take a microwave safe bowl big enough for all of the above to fit into to. Coat it with butter and drizzle syrup down the slides - try to get everything covered. Tip the sponge mixture into the bowl. Syrup: Dark syrup is good - very thick and doesn't collect in the bottom of the bowl when you add the sponge mixture. Maple syrup is also good but a bit too runny. Cover with cling film - not too tightly Microwave full power for 5 minutes, maybe 6 Take out - WARNING IT WILL BE FREAKING HOT - and place a large plate over the top of the bowl (take the cling film off first!). Tip everything upside down. If you're lucky the sponge will drop out and if not use a knife. The top of the sponge (and sides too hopefully) will be saturated in syrup. Serve Best eaten hot, server with custard (vanilija kastike), cream, icecream. When cold the pudding becomes firmer and soaks up the sauce like a sponge :-) Vegans Replace the eggs and milk and butter with suitable vegan alternatives, such as hemp oil, avocado, aqua faba, lettuce - oh I have no idea...all you need to ensure is that the proteins fold trapping the CO2 generated by the leivinjauhe during the cooking process. Microwave Yes, seriously, this is one thing that does work well in the microwave. During steaming the pudding is cooked slowly, in a microwave all of the water molecules are excited by the microwaves (yay physics!) simultaneously so you get the same effect and maybe better. That's the idea anyway. Safety THE BOWL AND CONTENTS WILL BE HOT WHEN YOU TAKE IT OUT OF THE MICROWAVE. USE OVEN GLOVES ON BOTH HANDS. THIS STUFF IS LIKE BOILING NAPALM - I HAVE THE SCARS. Take all necessary safety precautions: aprons, rubber gloves, goggles, gasmask, helmet, safety harness, clogs, attack dog, gun, VPN connection and have the hospital on speed dial... no wait ... that's the chilli I ate last week.....
at 18:43 3 comments:

Finally got to publish some results...more coming:

Kerbal Space Programme: What a fantastic way to: 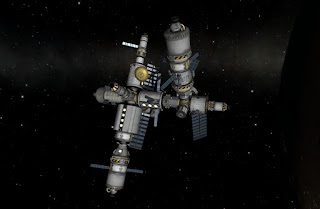 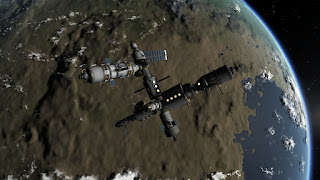 Now you'll have to forgive me, I've been testing landers for an Eve mission all day and I've a launch window coming up...
at 19:32 1 comment:

Email ThisBlogThis!Share to TwitterShare to FacebookShare to Pinterest
Labels: Space

Should the privacy profession adopt a code of ethics?

And excellent article by Angelique Carson published in the IAPP's The Privacy Advisor on Feb 28, 2017.

I really want to highlight a few points - in red and in bold:

“What started to grow was the notion of a privacy officer or privacy manager as someone who could run a program that could pull together the technical and the legal piece, and I think everyone in the profession at the time thought that was a really good thing,” Kosa said. “But as the discipline grew, as the domain evolved, a lot more people got interested in it, but a lot of those people got interested not for the same reasons the people who grew the field were interested in it.”

In other words, it turned into a compliance-based exercise.

That shift didn’t sit well with her. What irked her was her sense that the field was losing its strong base of privacy advocates, replaced by professionals who were saying to companies, “I can knock out a privacy impact assessment for you for $50,000, no problem.”

Personally I think she probably got a good deal for $50k ...

Let me say this again: PRIVACY IS A COMPLIANCE ACTIVITY

I also particularly like the  learnings she's brought from medicine to the area...specifically she's promoting a the basis of the approach to safety-critical systems .... now, I wonder who promoted that idea before....?
at 09:58 1 comment:

Two posts in one day - that's a good start so far. 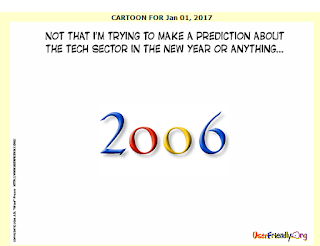 Email ThisBlogThis!Share to TwitterShare to FacebookShare to Pinterest
Labels: Computing

First post of the new year ... and this year I'll try to post more, but for a start, this from Wales On Line (sometimes Wales' answer to the Daily Mail - at least in terms of sensationalism)...

15 safest holiday destinations for 2017 and flight prices from Cardiff

All well and good, apart from the obvious sensationalism placing Belgium, Spain in almost the same category as Iraq and Syria...and on a personal note missing the World's safest country - Finland - from the mix.

What actually struck me about this article was the HUGE price disparity between flying from Cardiff than some other regional airports. This can be attributed to a number of things, mainly classic bad management over the years (this seems to have changed a little since the Welsh Government took over), but Cardiff has suffered from a management that has been quite content not to develop the airport.

This can be seen in the prices charged and the number of airlines coming to Cardiff, for example, flights to Iceland from the above article: Flights from Cardiff start from around £223, but can be picked up for less than £70 from London or Manchester. The price differential here covers travel from South Wales to London by practically anything other than a private limousine.

How about Poland? Great country and just a mere £142 from Cardiff, but only £20 from Newcastle or Birmingham. Malta? With a change of flight at £183 from Cardiff, or, less than £30 from those international heavyweights of airprots: Bournemouth, Glasgow and Nottingham...

Shopping around of course you might get better deals and Wales On Line probably isn't the best place to get your flight information in this respect. However the situation remains that Cardiff is expensive, especially with scheduled flights more or less limited to FlyBe and KLM and no cheap operators available: Norwegian HINT!!!

For Cardiff Airport to succeed a few things need to happen. Firstly the management of the airport need to get airlines and thus people to the airport - lower fees and even make a loss in certain areas but a profit overall. Control over airport taxes by the Welsh Government is critical and then finally a little more self promotion around the World, or at least Europe - maybe even China - I'm sure that even Wales could market itself from both a tourist and business perspective to the Chinese...

The situation gets even more surreal when you consider that the Cardiff region is supposed to be one of the fastest growing in the UK, yet Wales relies upon Heathrow and Bristol instead of a perfectly functional airport right next to its own capital city. Northern Ireland manages to support two airports - one of which  actually handles a reasonable amount of intercontinental flights, Scotland has five airports (Aberdeen, Inverness, Edinburgh, Glasgow and Prestwick) with Newcastle not too far from the border. Even some of the regional English airports such as Bournemouth and Exeter look better than Cardiff.

What Cardiff Airport needs is a management who have a vision and the confidence to attempt to make things better, get more business, get more tourists etc. In some ways Cardiff Airport still suffers from the problem that the Welsh Tourist Authority (or whatever they were called) had in that for them to do anything they had to ask the English Tourist Authority permission ... it still feels the same way.

In post-Brexit UK, the devolved countries of the UK, especially Wales, can not afford to sit back and hope for business. Cardiff Airport has a lot going for it with a major maintenance base for BA and another in St.Athan next door, GE Engines in Caerffili, a rail link (just about) and a runway that can handle 747s and A380s*, it just lacks any form of confidence.

*Not that you're going to see either regularly in passenger duty - unfortunately.

Email ThisBlogThis!Share to TwitterShare to FacebookShare to Pinterest
Labels: Aviation

While binge watching Midsomer Murders on YLE Areena ... yes, I know....but there is a correlation between watching crap TV/Movies and intelligence - or at least I hope there is.... anyway, there seems to be a remarkably high rate of murder, which prompts some interesting shower thoughts....


Various people have calculated the murder rates for fictional TV towns and come up with the conclusion that...well...let's see:


Here are the current rates worldwide for comparison, and summarised in murders per million

Email ThisBlogThis!Share to TwitterShare to FacebookShare to Pinterest
Labels: Humour

Here's the link to the PDF: http://www.politico.eu/wp-content/uploads/2016/12/POLITICO-e-privacy-directive-review-draft-december.pdf

It is highly unlikely that this will be retracted or hidden...something called the Streisand Effect.

As this concerns networks and OTT service providers this is potentially far more interesting that the GDPR in its scope. And, before someone goes off on a Daily Mail style anti-EU rant ( "EU bureaucrat demand that companies protect user data is evil" kind of thing ), this brings greater clarity and consistency to companies and EU citizens regarding how companies can use, profit from, market, sell etc, their data - good stuff!

Seminar: Software as a Medical Device

Seminar: Software as a Medical Device:
Safety and security.
January 5, 9-11 am

Connected Health cluster presents a practical seminar to help health IT developers and startups plan and manage smoothly their products to comply with needed standards and rules.

9:00 What is a software as a medical device and what is required to get regulatory compliant products on the market - overview of medical device software safety, regulations in EU and US, standards and FDA guidance - Dr. Marion Lepmets, Co-Founder & CEO of SoftComply – 30 min presentation + 15 min Q&A

Free for Science Park Tehnopol network and service clients and Connected Health cluster members. 30€ + vat for others.
at 22:01 1 comment:

Here is my presentation from the DIMECC 9th Annual Seminary on Business innovation in Finland.
Privacy Engineering for Today from Ian Oliver
at 11:03 1 comment:

Here are the slides and a longer presentation as a paper will be available soon:

Using Safety-Critical Concepts in Privacy Engineering from Ian Oliver
at 13:12 No comments:

I'm at CrIM'16 at the moment listening to an excellent lecture on IoT security and privacy by Prof. Sokratis Katsikas of NTNU. He used this quote from Bruce Schneier:


A small discussion resulted in this variation

If you think you think a 3euro bottle of water bought after airport security reduces the risk of terrorism then you don't understand security.

Email ThisBlogThis!Share to TwitterShare to FacebookShare to Pinterest
Labels: Security

After a few "side-bar" stories, I finally got one on the Newsbiscuit front page!

Go here for the full story... 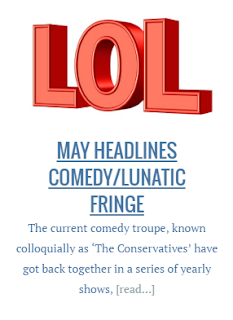 ..Trouble is, given the state of Brexit, I'm not sure this is humour or irony anymore...next step: The Onion - a place for more reliable news.
at 19:35 No comments: