The Internet - a way of accessing nearly all of humankind's knowledge...anyway, while reading an article about people with Rh negative blood types are descendent from aliens (spoiler, they're not) and how HAARP is causing climate change (spoiler, it's not) and other "interesting" articles (who writes this stuff?) about Freemasons from Atlantis build the Pyramids (spoiler, they didn't...well technically they did in the sense that masons build the pyramids - stonework, masons ... but they probably didn't come in spacecraft from Atlantis) etc, I do enjoy taking time to look at the direct advertising.

Geolocation of IP address is simple, which means you get clickbait such as these: 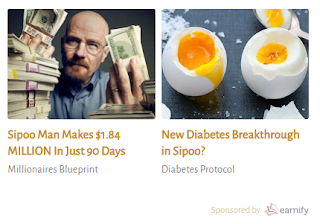 First of all two millionaires in Sipoo Finland, I think we might have heard about these especially given their willingness to appear in direct advertising, I'm sure they'd have appeared in the local press too. As for the guy with the lime green car - good luck driving that on our roads - and Diety knows where she's going to part that helicopter.

I particularly like the medical breakthrough...good thing I like eggs, though it might be a bit irresponsible showing a runny egg - those things are more dangerous than Ebola on a dark night - isn't that right Mrs. Currie!

So here we are, late 2016, vast amounts of knowledge at our fingertips and this is what we get...I mean, it isn't as if anyone could actually go and check the claims in the above advertisements is it?

A Philosophy of Riding

Been thinking about this for a while, but:

A seemingly unlikely combination: privacy engineering and ebola, though I guess there are similarities by which viruses spread with how personal data spreads around a company - another time and another study I think.

OK, so what the zark do these things have in common - the answer is via a convoluted path and actually is more related to how we react to an incident: privacy or medical (and we're back to safety-critical systems again).

Bit of background first: I've been reading about Marburg and Ebola recently - both are fascinating (and frightening) themselves, but what is more interesting from a procedural point of view is how they were discovered, researched and ultimately how we as a species react to them.

Now the procedural stuff, the CDC have a response plan for Ebola entitled: Identify, Isolate and Inform: Emergency Department Evaluation and Management for Patients Under Investigation for Ebola Virus Disease.

Worth reading just to understand how the CDC explain how to plan your due diligence - something we're exceptionally bad at in privacy ... we just scream PIA and COMPLIANCE !

The point here is that if privacy engineering is to emerge as a discipline we need to address our culture in how we react to incidents and even react in general. Learning from a discipline that already has to face critical incidents is a good start.