A paper from the University of Sussex that shows that horses 'understand' human emotions [1] has been published - a layman's version can be found on the BBC. To some degree this is probably quite well known by horse people, even taking into account that humans tend to project their emotions and anthropomorphise their pets.

While you could take the cynical, sensationalist approach by a certain UK newspaper (if you read the comments to the article then this is a crisis in the equine world brought on my left-wing, migrant, EU bureaucrats seeks to steal UK jobs and entitlements), this actually is quite fascinating research.

For a start, looking at this piece of work then it confirms a number of facts about horses, namely that being a domesticated animal they have either evolved an ability, or, used an innate ability (due to their existence as herd animals) to understand humans; in much the same way as dogs.

When reading work such as this, the experiment might be very small and limited in nature, it does open huge questions about, in this case, emotion processing in the brain, the evolution of cross-species communication, whether emotions (or certain emotions) are fundamental in nature, aspects of the human-horse relationship since early domestication etc.

When computers were real, and I mean the ZX Spectrum, the BBC Model B, the VIC-20 and all manner of 8-bit machines that booting straight into a BASIC interpreter (with a nod of the hat to the Jupiter ACE of course!), there was a little publishing company called Usborne who produced the most amazing books on computing. Now many of those books from the 1980s have been released free via their website.

One book in particular will always stand out for me: 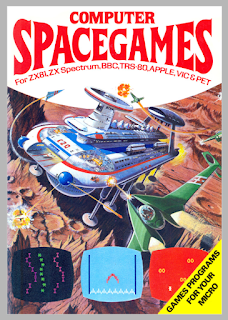 On pages 24 and 25 is a listing for a game called Space Mines - a very simple simulation game based on selling ore for food and mines. That particular game got typed in, played with, modified, reimplemented and I guess in no small way started my love of simulation games which more than likely led to me writing a language for implementing simulations ( BSc degree final year project ) and later trying to simulate the behaviour of systems from their formally specified models ( PhD thesis ).

So to Usborne, the writers, editors and everyone involved in those books, especially the person or persons who wrote "Space Mines" my deepest, heartfelt thanks!

I love low-quality targeted advertising...its sort of like watching a bad Sci-Fi B-movie from the 1950s without the mental effort...take this for example 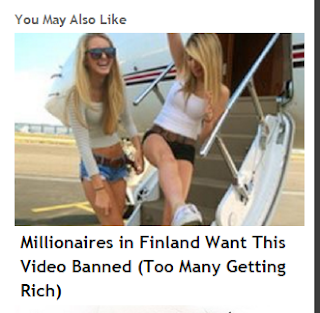 Well I'd certainly like to be rich, but to be honest there aren't too many millionaires here and certainly not many being made by watching some video - and no, I didn't click on the advert....maybe this is why I'm not a millionaire...or maybe I am, but I'm not telling you how*

Now it does get better: 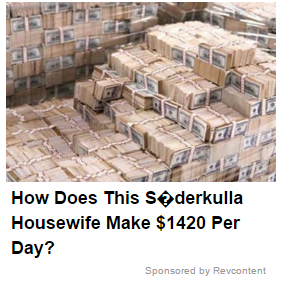 Apart from the slightly suspicious encoding error, it should be an 'ö' and I guess the currency conversion is going to be a bit of pain, yes I too wonder how that housewife makes that sort of money...I wonder where she lives to be honest because at that rate I'm guessing she might be moving from Söderkulla to somewhere nice, such as the Cayman Islands.

A bit of a rough calculation for 1 year:

365 x $1420 - 5% currency exchange fees and 60% top rate of Finnish tax and your potential $550k becomes just under $200k, and most likely an entry in the yearly, public list of top tax payers. If she's not there then I think the above advert just gave a great tip-off to the Finnish Tax Authorities :-)

But it gets better!

Forget that $1420 per day, just use a crazy loophole and another "habit" (I wonder what?) and you could be making a fantastic $6679 PER DAY!!! That's nearly $2.5 million per year or a still respectable $1.4 million after tax, and maybe a visit from the tax authorities again.

Now the cynic in me might think that these are targeted adverts based on my IP address and are possibly not true, and that clicking on suck an advert is a great way to receive some nasty virus...which may or may not be similar to the nasty viruses one could get earning such money through some "habits" ....

Isn't the Internet wonderful...and to think we could have had a base on the Moon by now....

But, this isn't all, anyone interested in semantics will question that $ means...nowhere is it stated US Dollar...so in the best case $2.5 million dollars could mean 2.5 million Zimbabwean dollars, with a total worth of approx $6900 where $ = USD in this case....so our housewife from earlier might be earning as much as 3 Euros per day ... phew!
at 13:35 No comments: Links to this post