Email ThisBlogThis!Share to TwitterShare to FacebookShare to Pinterest
Labels: FIFA 2012

Fascinating article by way of The Guardian this morning, tomorrow is 1 year since the discovery of Neptune 167 Earth years ago...

As Neptune nears a historic orbit around the Sun, Robin McKie recalls the dramatic story of how the icy world was discovered 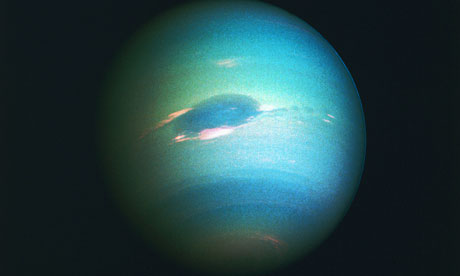 Neptune rising: although discovered in 1846, we didn’t get a glimpse of this alien world until Voyager 2 swept past in 1989. Photograph: Corbis
Astronomers will celebrate a remarkable event on 11 July. It will be exactly one year since the planet Neptune was discovered. Readers should note a caveat, however. That year is a Neptunian one. The great icy world was first pinpointed 164.79 years ago – on 23 September 1846. And as Neptune takes 164.79 Earthly years to circle the sun, it is only now completing its first full orbit since its detection by humans. Hence those anniversary celebrations.

Email ThisBlogThis!Share to TwitterShare to FacebookShare to Pinterest
Labels: Neptune

Incredible image from AOPD of the central peaks of Tycho Crater on the Moon taken by the Lunar Recon Orbiter ( NASA,  Wikipedia ).

The resolution is 1.5m per pixel so there are some spectacular boulders and rock-falls on show.
at 12:25 No comments: Links to this post